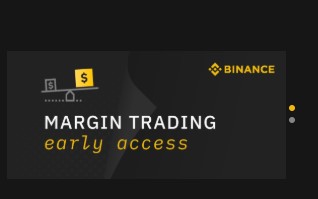 Margin Trading Coming to Binance: How It Works

After a recent mistake where Binance’s twitter account posted a screenshot where a “Margin” section could be seen, the expectative that the exchange was about to open a margin trading section was set.

Rather than trying to hide it, the company went all out, allowing users to know that, indeed, margin trading is coming to Binance.


What is margin trading?

Margin trading, also known as day trading, is the practice of buying and selling a stock or token in a short amount of time – often buying when the market opens and selling when it closes.

It’s a high risk, high reward scheme that allows traders to profit from whichever stock or cryptocurrency is having its day in the sun.


Couldn’t I do this on Binance before?

You could, of course. With your own money.

The thing about margin trading is that traders often don’t spend their own money, but somebody else’s.

For example, a trader who has $100 to trade might be able to borrow $900 from a margin trading service for a percentage of the end-of-day earnings.

The drawback is that the trader must end all trades if the money he’s invested is gone, in order to preserve the loaned money, in this case known as leverage.


You could do it then. What’s new?

What’s new is that Binance is offering the service themselves. It’s basically a built-in leverage service that makes day trading on Binance much easier than it used to be.

While before you’d have to stake your own money or get an outside investor to give you leverage, now Binance can do it automatically.


So this is easy money?

Only if you have the market awareness to know exactly what to go for each day. The process might seem simple – just go for whatever has been going up – but even during bull markets losses can happen.

Knowing exactly when to jump in and out is a part of the job, and in margin trading the right moment to sell can be pinpointed by the second. Try five minutes too late and prices might have gone down.

In other words, it’s not easy money. It requires a lot of knowledge, attention, and even a little bit of luck.

The Binance Margin Trading system is in closed beta at the moment. For now, only those traders invited by Binance can join. There’s no way to opt-in other than receiving an invitation.

Also, US traders can’t join the service. Margin trading is strictly regulated in the US, so Binance isn’t allowing it for the moment.


When is it going live?

We don’t know when, or even if. It’s in beta, and it should go live in perhaps a couple months, but even then there’s no assurance.

The system as is today will likely be tweaked (at the moment it only offers 1:2 leverage, which is much smaller than other exchanges do) so even its details aren’t set in stone.

Also, since Binance is in this for the money, we can’t discard the idea that it might just back out if the service ends up losing money.


Any way to know when it’s live?

Just keep checking the news. When it’s finally open it’ll be big news, as the market is expected to be impacted by that move. It’s unlikely any crypto news website won’t report on it.

Alternately, following Binance on social networks should also let you know right away.