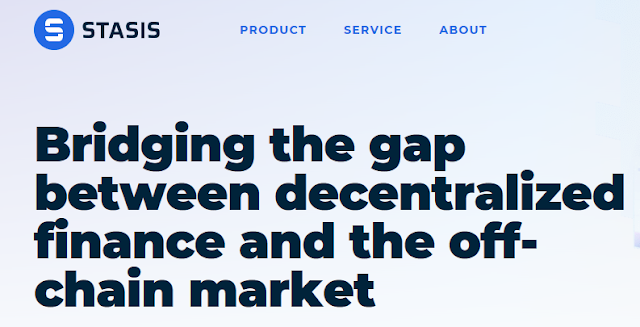 STASIS operates the EURS coin which is paired to the Euro. The EURS coin is the result of years of legal research into cryptocurrency, though the team’s primary goal is to bridge the gap between traditional finance and cryptocurrency through the creation of tokenized assets.

STASIS provides a tokenized financial asset service that is the result of years of legal research. Their token, the EURS, is tied in price to the Euro in an attempt to move away from the volatility of other cryptocurrencies.

Its goal is to bridge the gap between traditional financial institutions and cryptocurrencies by cutting out the negatives of both and combining the positives and following strict legal guidelines. They believe that this is the best way to move the world into cryptocurrency.

STASIS is a brand-new way to tokenize financial assets by pairing them against the Euro.

STASIS is based in Malta and is run by CEO and founder Gregory Klumov. Klumov, according to STASIS’s website, has a strong background in both IT and finance, and started out as an entrepreneur at the age of 15.

Klumov has a keen interest in what he calls ‘stablecoins’, cryptocurrencies that have the stability of fiat currencies. He believes that cryptocurrency can solve issues with traditional money supply because it is very easy to forecast how much of a particular coin will be made in one year.
Other members of the team include CTO Anatoliy Knyazev, a computer scientist, CFO Vyacheslav Kim, and CLO Konstantin Orlov.

Like a number of other blockchains have shown of late, STASIS was developed to fulfill more than just cryptocurrency transactions. STASIS is also able to facilitate transactions between different cryptocurrencies and, most importantly, can tokenize other financial assets, such as company stocks.
The EURS coin was designed to be a tokenized version of the Euro and its price is tied exactly to it. The purpose of this is to supposedly create a coin which benefits from the technological uses of blockchain while offering the stability of a fiat currency.

STASIS wants to be the bridge between what cryptocurrency wants to be and where the world is already with traditional fiat currencies. To do this, the team spent years researching the legal framework it would need to follow to be accepted by businesses and governmental organizations.

STASIS appears to mostly be targeting large institutions and experienced traders, not paying too much attention to the crypto community. However, its worth noting that STASIS appears to be more interested in tokenizing financial assets and less so in competing in the cryptocurrency market.

Since Ethereum smart contract is best-known in the market, let us see how it compares to the STASIS option:

In order to purchase EURS from the primary market, users – institutional or otherwise – must pass STASIS’s KYC and/or AML procedures. Those interested in purchasing EURS in the secondary market can do so via exchanges that list EURS.

Users can take advantage of STASIS by storing their cryptocurrency investments as EURS while the environment is unstable. This opens the pathway for investment security.

STASIS, as a company, has actually been around since at least 2012, but only recently started to gain widespread attention when it released its blockchain in 2018.

The mileage it has particularly in the fintech scene, comes from how it has carefully taken its time to investigate how cryptocurrency should be regulated, which has allowed it to theorize what aspects of the crypto world and traditional finance should be merged.

By pairing the EURS coin with the Euro, it has opened the door to a number of other investors who were interested in cryptocurrency but felt uncomfortable with it due to its instability.

STASIS is up T $1.10 as it is trading higher by 0.1 percent today according to Coingecko.

It also worth noting that if STASIS is capable of keeping the EURS coin tied to the Euro, its price is less likely to fluctuate as violently as other cryptocurrencies. This means a different investment strategy may be needed for this coin.
STASIS is already listed on a number of exchanges, including DSX, a London-based cryptocurrency exchange.

STASIS has managed to tap into a new market – tokenized assets. If it manages to gain the attention of large companies it is likely to revolutionize the way stocks, shares, and futures.

Those who are considering buying EURS should remember that it is paired against the Euro, which means that it has been specifically designed not to be as volatile as other cryptocurrencies. In a sense, STATIS is more useful to traders as a tool to secure an assured profit or investment.